The Start Of It All

While most boys were playing little league or delivering news papers. I was learning to wet sand, color buff and handle mechanical repairs.

We were approached to restore a MG Midget and found it to take up less room in the shop when apart and way more fun to drive at speed.

Our collection soon expanded to include a MGB, a Jaguar XKE roadster, a Triumph Spitfire, a TR 250, a TR6, a TR7, and a TR8. We were now fully hooked on the British sports car scene.

My father and I started Automotive Artistry in 1985 specializing in the British marque ranging from 1947 to 1980. We have  been lucky to be able to do what we love. My father has now passed, but I carry on his tradition of old world craftsmanship. 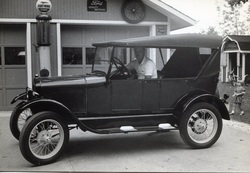